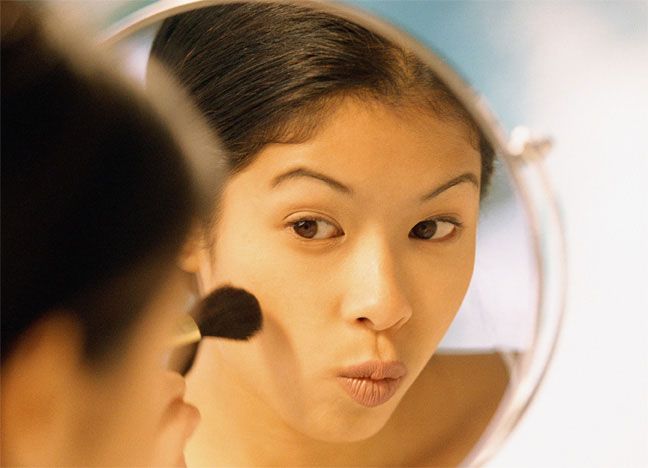 The Asian eyelid is different from the Caucasian eyelid in many ways, which is why it requires specialized treatment. One of the most frequent mistakes that plastic surgeons make is “Americanizing” or “Europeanizing” Asian eyelids, which often results in a very unnatural appearance. This is why Oculoplastic surgeon Dr. Amiya Prasad recommends Asian eyelid surgery when dealing with such cases.

Asian eyes require delicate finesse when dealing with the typical epicanthal fold that lies in front of the eye, so that proper rejuvenation does not mar the natural beauty of this type of eye. As an Oculofacial plastic surgeon, Dr. Amiya Prasad is well-versed in Asian double eyelid surgery and has performed Asian blepharoplasty for many of his Asian patients who have requested it.

Asian Double Eyelid Surgery Before and After

This 24-year Asian woman desired a crease or “double fold” for her eyes. Dr. Prasad performed Asian eyelid surgery for her and now she feels her eyes look more open.

This young 25-year old man had been saving up to get Asian eyelid surgery. He had partial creases that he felt were a distraction from his appearance, and he felt that we understood the subtlety of the look he was seeking.

This 55-year old Asian man had been bothered by his lack of creases for years but chose not to do anything about it. That was until his signs of aging caught up with him, and his eyelids actually interfered with his vision. He had Asian eyelid surgery done by Dr. Amiya Prasad to improve his vision. He was not bothered by the lower lid bags that he had. He felt that they were appropriate for his appearance so he elected to leave them alone.

How to Choose A Cosmetic Surgeon for Asian Double Eyelid Surgery

Asian Eyelid Surgery requires a thorough understanding of the unique anatomy that makes Asian eyes especially different. Ethnicity, age, gender, skin quality, as well as general health assessment all need to be well-integrated into the development of a proper treatment strategy.

Whether you are considering Korean eyelid surgery, Chinese eyelid surgery or Japanese eyelid surgery, the common desire is typically to have the eyes appear more open. These surgeries are often referred to as Double Eyelid Surgery as approximately half of Asians have a “single fold” and half have a “double fold”.

The “double eyelid fold” procedure gives the upper eyelid a visible crease when the eye is open. This change to the upper eyelid makes it easier to apply makeup and is considered to be a desirable aesthetic appearance in many Asian cultures.

How is Double Eyelid Surgery Done?

In order to create a natural-looking double eyelid, the surgeon must take the patient’s age and gender into account. It’s also critical to avoid removing excessive skin or fat, which is a common technical error made by surgeons less familiar with the anatomy of Asian eyes.

Proper Asian eyelid surgery usually begins with a design which is drawn prior to the procedure, in order to avoid scars that go outside the natural crease and are difficult to manage. Incisional, non-incisional or limited incisional procedures can be customized to suit your needs or preferences.

Differences between the Asian Eyelid and Caucasian Eyelid

Asian eyelids differ from Caucasian or Occidental eyelids in many ways, which is why it requires its own special approach and treatment. These differences are manifested in the following ways:

Aside from these external physical differences, one crucial way that the Asian upper eyelid is also different, is in terms of its internal anatomy. In occidental upper eyelids, or creased eyelids, there is a natural connection or adherence that joins the levator muscle (which is responsible for lifting the eyelids), the orbicularis muscle, and the skin. This strong connection is what creates a clear crease in an occidental upper eyelid when it opens

This connection, however, appears to be much weaker or absent in Asian upper eyelids. When the eye opens, instead of getting lifted as one compact unit, the orbicularis muscle and the skin simply slides down over the lid, forming a smooth exterior with no crease visible. Not all Asian eyelids have this same type of physical anatomy; in fact, there are many anatomical differences in the various Asian subgroups as well.

Because Asian eyelids can be quite complex in their anatomy, Oculofacial plastic surgeon Dr. Amiya Prasad recommends Asian eyelid surgery (or Asian blepharoplasty). It is important to approach such cases with finesse—especially when dealing with the typical epicanthal fold that lies in front of the eye—so that proper rejuvenation does not mar its natural beauty. One of the most frequent mistakes that plastic surgeons make is “Americanizing” or “Europeanizing” Asian eyelids, which often results in a very unnatural appearance.

In Asian eyelid surgery, there are two types of techniques—incisional and non-incisional. 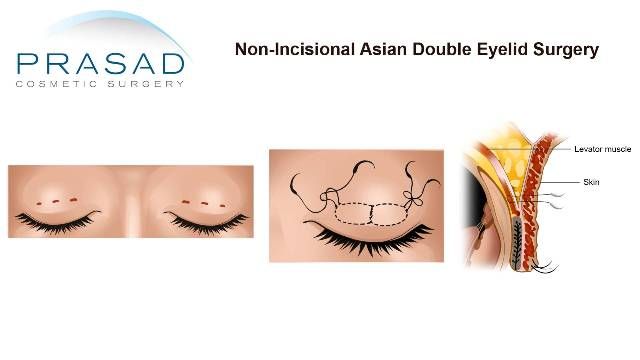 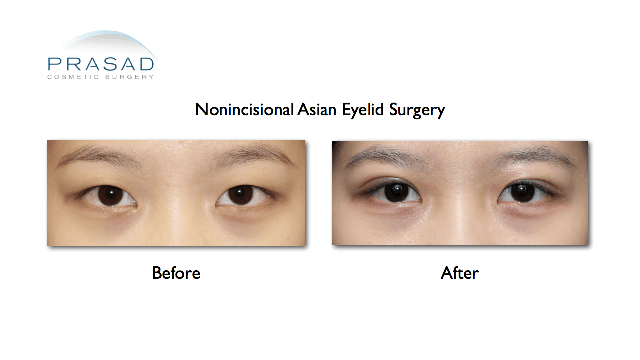 The non-incisional Asian eyelid surgery technique is appropriate when no extra fat or eyelid skin needs to be removed, and eyelid skin quality is good.

The non-incisional technique is done by creating small openings on the upper eyelid skin, through which a stitch is passed through and under the skin. The stitch is passed through in such a way that it attaches the upper eyelid skin to the levator muscle that lies underneath. This approach is appropriate for patients who do not have excess fat and skin that prevents the formation of an eyelid crease. 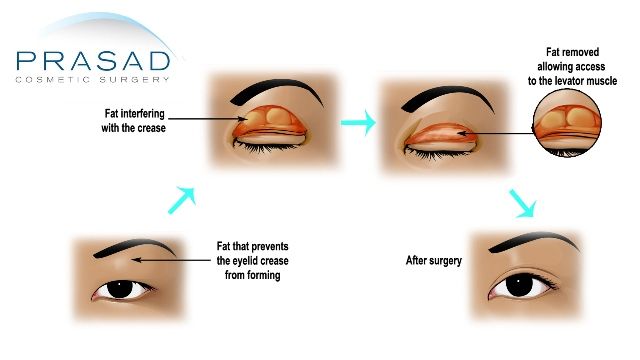 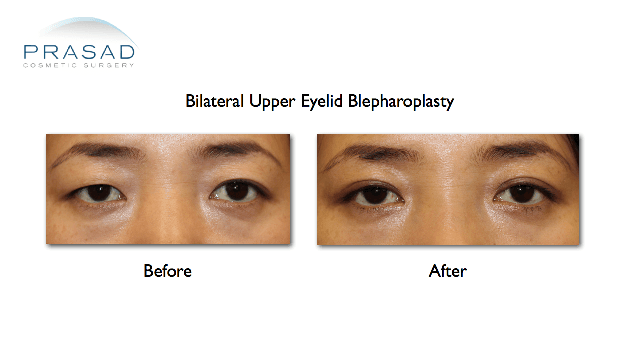 The incisional technique, entails creating incisions on the eyelids for the purpose of removing excess fat and skin that prevent the eyelid crease from forming. After a thorough assessment of the patient that surgeon decides on the incisional approach due the presence of extra skin and fat. The surgeon then determines the proper height for the eyelid crease to look like it was naturally formed at birth. An incision is made for skin to be excised. The amount of skin removed will be dependent on the measurements of the height of the new eyelid crease.

The incision made usually goes deep, until the orbital fat is visible. The surgeon then removes the appropriate amount of fat that will produce the desired outcome, after which the surgeon secures an attachment between the levator muscle and the dermal layer of the skin. With this proper tissue removal and arrangement, a double eyelid crease is created.

Keep in mind that these techniques are highly-specialized procedures that require the expertise and skills of specialists who have meticulously trained in the area. It would be in your best interest to seek out a surgeon who specializes in these types of procedures, in order to avoid any complications. 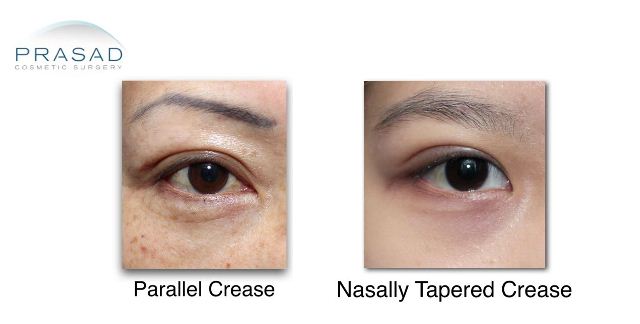 Determining height of the Asian eyelid crease is based on what looks natural, while length is based on a natural-look and the patient’s desires.

How Long Does Double Eyelid Surgery Take to Heal?

As with any other type of surgery, one can expect a significant amount of swelling after undergoing Asian Eyelid surgery. This reactive swelling is a normal response of the human body due to trauma, which is basically what surgery is—controlled trauma.

Sometimes, patients will become concerned when they observe that the swelling around their eyes has not subsided, even 3 months after having had the surgery. An important point to keep in mind with regard to this, unlike superficial wounds on the rest of our bodies that can heal up completely in less than a month. Surgical wound healing can take as much a year to fully manifest, because you are dealing not only with skin, but with the inner muscles and tissues as well.

In addition to this, it must be said that there is no direct correlation between incision healing and swelling. Swelling does not mean that the incisions are not healing well. In fact, swelling can be caused by a number of different reasons, such as fluid stasis in the lymphatic and circulation system.

Another important point to keep in mind is that most of the work that occurs around wound healing happens at a cellular level. Which is why we cannot see any immediate external results right away.

Despite this, Dr. Prasad can ensure that most of his patients can return to work within a week, and can expect most of the swelling to go down within a month.

How to Reduce Swelling After Double Eyelid Surgery

In order to help minimize the amount of swelling produced by Asian Eyelid surgery (as well as other procedures); Dr. Prasad developed a system that renders maximal gain and minimal risk. He does this by employing his LITE IV™ sedation technique, wherein patients are placed under twilight IV sedation and are still somewhat conscious during the duration of the procedure. This method helps reduce the amount of swelling in the patients and helps them recover faster than they would have had they been placed under general anesthesia.

The way and the rate at which a person heals is, of course, a case-to-case basis. Dr. Prasad recommends that constant communication must be maintained with one’s surgeon, in order to ensure that everything is on track and to gain a proper understanding of the procedure and its effects.

Lastly, and most importantly, it is essential that you seek out a surgeon who is experienced, comfortable and well-versed in performing these types of surgeries, as they can be quite complex and require skills that go beyond that of general surgery practitioners. 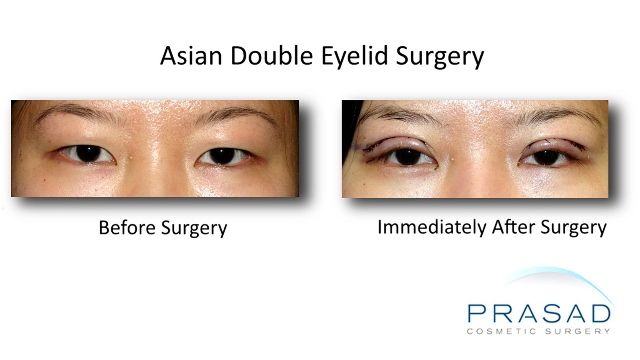 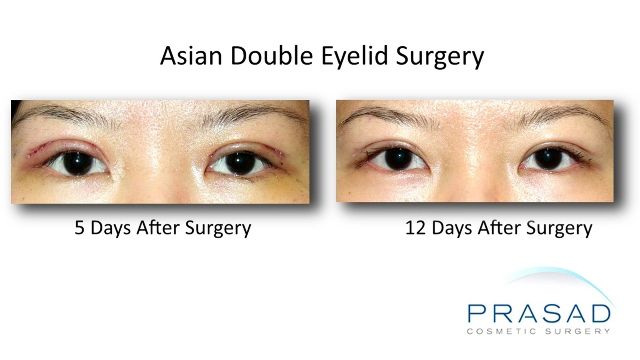 Before making a decision, consider having a personal evaluation with New York eyelid surgery specialist and Oculoplastic surgeon Dr. Amiya Prasad to determine what is the most appropriate procedure(s) for your specific case.